Are the New Postgraduate Loans Really a Good Thing? 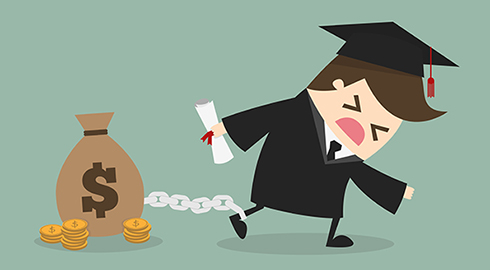 From 2016, new loans of up to £10,000 will be available to students applying for taught postgraduate courses. But is this exclusively a good thing? Victoria Williams shares her concerns...

If you’re a student or recent graduate, the chances are you will have heard about the Conservatives’ new youth-vote grabbing policy: postgraduate loans for students wishing to undertake a master’s degree. The chancellor, George Osborne, who announced plans for the £10,000 loans as part of the annual Autumn statement in December, claims the new student financing initiative will widen access to postgraduate education and even increase social mobility. It’s just a shame they’ll likely do anything but.

On the face of it, the loans are a great idea, and they aren’t without their merits – as under the current system student loans are only available to cover the cost of undergraduate courses, students wishing to undertake postgraduate study must rely on a severely restricted public funding system, pricey private loans or the bank of mum and dad if they aren’t able to finance their course themselves.

The situation is even worse for those wishing to study a taught, rather than a research based degree, for whom no public funding has been available since 2011. This has put students of arts and humanities degrees, which tend to dominate taught courses, at a disadvantage, as does the fact that one of the few private finance options for master’s degree students, Career Development Loans, are only available to students who can prove their course will be advantageous to their career – something that is naturally harder for arts students to do in any tangible way.

Under the new scheme, however, student loans of £10,000 will be made available to students applying to study master’s degrees across all subject areas, regardless of whether theirs would be a taught or research-based degree. This would certainly put money in the pockets of students who previously didn’t have the capital to meet the upfront costs of further study, or who have been rejected for public funding or a private loan. So what’s the problem?

Well first up, there are concerns about the rate of repayment, likely to be 9% on earnings above £21,000. While that’s the same rate at which undergraduate loans are paid back, it’s worth noting that they’ll be paid concurrently – so if you haven’t paid off your undergraduate loan by the time you take your master’s (which, let’s face it, is pretty likely), you’ll end up paying back 18% of your wages every month once you reach the earnings threshold. Add Income Tax and National Insurance into the mix and that’s a whopping 50% of your earnings that won’t make it as far as you bank account every month, meaning – after deductions – an average pay packet of £24,000 would look more like £12,000 – only a little more than £400 a year over the minimum wage.

Plus there’s a crucial difference between undergraduate and the new postgraduate loans in that the new loans don’t take account of where the applicant is planning on studying; so while you’ll qualify for a bigger loan if you choose to study for your bachelor’s degree in London, for example, the postgraduate loans will be available at a flat rate of £10,000 regardless of where you’ll be taking your degree. The average tuition fee for a master’s course is £6,000 nationwide, and can be closer to £8,000 in London and the south east, where living costs are also much higher. With no additional funding, it’s hard to see how anyone with only £2,000 - £4,000 to live on for a whole year could avoid getting into further debt – and not the kind of debt that you don’t have to pay off until you’re earning £21,000. More likely, students would be relying heavily on facilities like bank overdrafts, which can charge hefty fines if you go over the approved limit, with the fees only growing with every month that you don’t pay them off.

That’s not to say an extra £10,000 won’t come in handy for plenty of potential students; the treasury estimates the new loans will help an extra 10,000 a year enter postgraduate education. But the question is, who will those 10,000 extra students be? Since the loan won’t be enough to cover both tuition and living costs, they’re likely to be students from middle class families whose parents can still afford to support them financially, and not the underprivileged youngsters George Osborne is presumably reaching out to when he uses phrases like ‘social mobility’. As has been pointed out elsewhere, it’s hard to see how accruing even more crippling debt is going to help anyone escape poverty. The truth is, as things stand now the new loans will do little to radically change the face of postgraduate education; if not exactly maintaining the status quo then bringing us status quo plus.

Finally there’s the age limit to consider – Osborne’s loans won’t be available to the over-30s. Why ever not? Master’s courses have traditionally attracted high numbers of mature students, with people retraining after a change in career being a good example. Plus, they’re known for their dedication to their studies and consistently high results. The fact that the Treasury is willing to exclude such a group, among whom the loan would doubtless be very popular and who would stand to benefit from them greatly, reveals the loans for what they really are – nothing more than political subterfuge, a cynical ploy to keep young people quiet for another year once they graduate and realise there are still no jobs for them. This government has sold young people down the river time and time again by tripling tuition fees, slashing benefits for the under 25s (and in the case of housing benefits, the under 30s), failing to tackle youth unemployment and allowing the scourge of unpaid internships to flourish, and this prime example of sticking plaster policy isn’t going to do anything to solve the problem.

.@George_Osborne Very disappointed to read that the postgraduate loans for masters study are only available to under 30's. Why?

So what might? The postgraduate loans are a good idea in theory, if not in practice. One way George Osborne could prove he’s serious about helping poorer students into postgraduate study would be to means test the loans in the same way that undergraduate loans are means tested, offering larger amounts to students from underprivileged backgrounds (and those studying in London and the South East) and smaller amounts to students whose families are better off. Better yet, the funding pot set aside for this venture could be divided into a mixture of loans and non-repayable grants for those who need them most, levelling the playing field and allowing everyone a chance to pursue their education as far as they wish. At the very least, the currently proposed repayment plan could be restructured, by enabling graduates to defer repayment of postgraduate loans until after they’ve paid off their undergraduate loans, or by raising the earnings threshold for repayment of postgraduate loans – after all, the aim is to help students into high-flying careers, and £21,000 is a distinctly average pay packet. Why has the Chancellor set his sights so low? Lastly, if the government really wants to regain our trust, they could drop the arbitrary age limit for financial assistance with further study.  No doubt costs will be raised as a concern in the case against extending availability to the over 30s, but if the loans do their job in helping graduates into top jobs, they’ll surely be paying them off, with interest, in no time. Osborne just needs to have a little faith.

While at this formative stage, the Tories big idea of postgraduate loans may be based on a false premise, that doesn’t mean it’s without merit. Here’s hoping they return after the public consultation with a properly packaged plan that’s a bit more palatable for everyone.

- How Will the New Postgraduate Loans Actually Work?

- The ULTIMATE Guide to Postgraduate Funding