How Will The New Postgraduate Loans Actually Work? 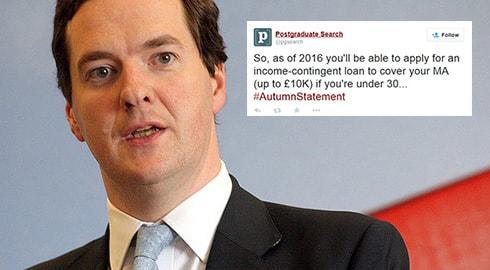 Everything you need to know about the postgraduate loans being introduced in 2016, including how they work, who they will benefit, and what students think of them...

While student loans have been available to cover the cost of undergraduate degrees for many years – even since fees increased to £9,000 per year – it’s long been a sticking point that those wishing to study at postgraduate level have had to apply for financing from ever decreasing pools of public funding, take out a career development loan, or somehow come up with the cash themselves. Now, in the biggest shake up for students since the fee increase, George Osborne has announced the introduction of state-funded loans of up to £10,000 for Master’s degree students as part of the Treasury’s annual Autumn Statement.

If you’re thinking about further study, here’s everything you need to know about this new kind of funding....

How will the loans work?

We don’t have all of the details yet; the loans won’t be available until 2016 and the government is set to hold a public consultation in the early part of this year to hash out the finer points. What we do know so far is that the loans will be worth up to £10,000 each and will be available to students pursuing master’s degrees across all subjects – this is unexpected good news for arts and humanities students, as it was originally rumoured that the loans would only be available for students applying to science, maths and engineering courses. How the loans will be repaid is part of what will be decided after the public consultation, but under one plan currently being considered by the Treasury, loans would be repayable at about 9% of earnings once your wages hit the £21,000 mark (that's 9% of any money you make over £21K, not 9% of your total). Postgraduate loans would be repaid concurrently with any outstanding undergraduate loans, meaning you would be paying back both sets of loans at the same time once you met the minimum earnings threshold.

Who will they benefit?

Quite a lot of people, actually. According to Osborne, the new loans will see admissions to postgraduate courses rise by 10,000 a year. Students wishing to study taught courses at postgraduate level will particularly benefit, as the research councils (the main bodies which offer postgraduate funding) withdrew funding for taught master’s courses a few years ago. Funding for research based master’s degrees and PhDs has also been severely restricted in recent years, so the loans may well allow some students who have been previously turned down for funding to enrol on courses after all. Again, the loans will be a boon to arts and humanities students, for whom there has historically been less funding available than there is to students of science-based courses. The government has cited a growing requirement by employers for highly skilled labour as one of the main reasons for introducing the loans, suggesting they hope the loans will help university graduates find work (as well as creating the opportunity for increased social mobility). All in all, a lot of people are pretty excited:

"BBC News - Autumn Statement: Postgraduate loans of £10,000 http://t.co/1kgAOMbxaQ" I may actually have a postgrad future now

There is one group of potential postgraduate students who won’t benefit, however – in a move that will no doubt come as a blow to mature students, the loans will not be available to anyone over the age of 30.

Are there any downsides?

As well as the age restriction, some people have expressed reservations about the potential rate of repayment. Check out this exchange that took place on Twitter after the news was announced:

Since the postgraduate loans would be paid back at the same time as undergraduate loans, graduates would be losing 18% of any income over £21K to loan repayments alone once their earnings reach the £21K threshold. Once income tax and National Insurance contributions are accounted for, the current plans for repayments could see graduates taking home only 50% of anything they earn over £21,000, potentially leaving them with little spare cash at the end of each month.

There are also questions over whether or not £10,000 is enough to cover fees and living costs, especially given that where you study isn’t taken into account:

#PGloans don't address key issue of maintenance. And with concentration of PGT/PhD programmes in the South East, living costs are high.

London is a notoriously expensive option, with master’s degrees frequently costing around £8,000 (nationwide, the average is £6,000). Since this could leave as little as £2,000 for students to live on for the entire year, the loans could lead to students getting into further unnecessary debt if they don’t do their sums before embarking on their course.

Some people also worry about the impact of new funding for master’s degrees on other equivalent postgraduate qualifications:

If the postgraduate loans are limited to master’s degrees, it is possible that applications to other kinds of postgraduate qualifications will fall, potentially making those courses even more expensive for those wishing to study them as institutions seek to make up for the shortfall by raising fees – the opposite of what the government is trying to do with this proposal.

What do future postgraduate students think of the loans?

To see how the next crop of potential postgraduate students feel about the new loans, Postgraduate Search spoke to Georgia Goodall and Jordan Gold, both recent graduates who are considering returning to university to study master’s degrees...

What are you considering studying at postgraduate level?

Georgia: I’m looking into Publishing courses at the moment at Kingston and UCL.

Jordan: I’m considering a master’s in Film Theory, which would be a continuation of my undergraduate degree in Film and Screen Studies from the University of Brighton.

Are you more likely to apply for further study knowing that these loans are available? Would you consider deferring your application for a year so you can take advantage of them?

G: This definitely makes doing a master’s seem more possible – I will definitely consider putting off applying for a year if I decide to go ahead with an MA. Education should be available to everyone, not just those fortunate enough to have expendable thousands. The loan would definitely help me.

J: No – if anything, this announcement makes me less likely to do a master’s. The new loan availability doesn’t actually change much, other than positioning the government as a slightly better dressed Wonga.com, standing to make a lifetime of profit out of poorly (for the student) structured debt. The fact that this idea is even being sold is enough to put me off of further venture within the education industry.

Does the rate of repayment put you off, or do you think it’s worth it?

G: It’s been said that by the time you're paying it back – on top of your undergrad loan – it'll be 50% of your pay cheque each month going out, and who wants that? But if you can't get the job you want without it (because you don't know the right people for nepotism to work and you can't get a job without exp erience, etc.) then you won't have any income anyway. So on balance, I think it’s worth it.

J: As I said, MAs have always been a big financial commitment but fewer subjects and paths of study are now viable financial choices. As somebody who wants to study a subject that does not guarantee a lucrative pay-packet in a growth industry, the choice to continue my studies is becoming less and less appealing and that's really the opposite of what a country in England's economic situation should be trying to achieve.

What do you think about the loans only being available to the under 30s?

G: I can see both sides of the argument – it seems unfair on mature students, but they’ve also had more time to save up money for themselves.

J: It's a bit of a blow to mature students, who tend to make up a much higher proportion of MA classrooms than 20-somethings. If the government is concerned that not enough people are considering – or financially able to consider – MAs, why exclude the over 30s from this incentive? It's spilt milk now anyway, but perhaps more people would have a warmer attitude towards another year or two in education if the government hadn't tripled the tuition fee cap...

Interview with a master’s degree graduate

How would the new postgraduate loans have changed things for young people who have already completed their studies? We asked Damien Ryan, who finished his MA in Journalism last year, for his opinion…

What do you think of the new postgraduate loans?

I think it’s a flawed idea – I don’t how 'social mobility' can be granted through amounting debts?

Do you think you would have benefited from the loans? Would you have applied?

No – I wouldn’t have applied even if they had been available. I've just graduated and I'm stuck in unpaid internships and a job in retail so there’s no way I would’ve agreed to getting into debt unless I knew I was coming out of the master’s and into a well-paid job in banking or something.

Do you think you would be in a better or worse position financially than you are now if you had been able to apply for a loan to cover the cost of your course?

I think I’m in a better position as it is, to be honest. I used my savings to pay for my masters course so I didn't need the loan; I have absolutely no idea how anyone could survive paying back up to 50% of their monthly wages – I know I couldn’t.

What do you think about the loans only being available to the under 30s?

I was 23 when I started my course so it wouldn’t have affected me, but it seems odd – mature students tend to be more dedicated than the rest of us so I'd imagine that they'd actually benefit much more from the opportunity than a load of 20-somethings like my class group (who were largely just interested in putting off getting a real job for another year).

Postgraduate loans will undoubtedly widen access to postgraduate education, enabling students to apply for master’s degrees who might not otherwise have been able to afford to do so, and that can only be a good thing. However, we need clarification from the government on exactly how expensive these loans will be to pay off, and the arbitrary age limit will obviously prove disappointing for many. As Emmie Bryant, a current PhD student put it on Twitter, it’s a step in the right direction. But there’s still a lot to learn…

A step in the right direction, but with much still unaddressed http://t.co/129K5lnRyU #PGloans

- The ULTIMATE Guide to Postgraduate Funding