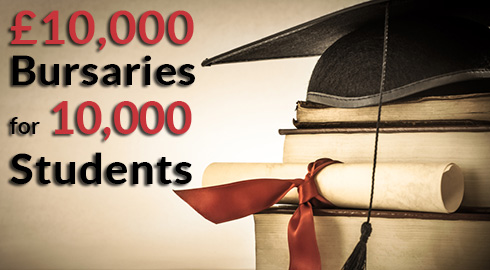 Prospective postgraduate students were pleasantly surprised lately when the coalition government announced plans for £10,000 loans to be made available for master’s degree students from 2016 onwards. And in more news likely to be well received by the student community, plans have been revealed for the provision of £10,000 bursaries to disadvantage and/or under-represented master’s degree students starting their courses in 2015.

The good news keeps rolling in for students. For one year only, £10,000 grants will be made available by the Higher Education Funding Council for England (HEFCE) to postgraduate students starting a master’s level course. The grants are a temporary measure, designed to bridge the gap in provision until the new loans kick in in 2016, and as such will only benefit students due to finish undergraduate courses this summer who will be enrolling on a master’s degree course starting in the 2015-16 academic year.

Although full details won’t be finalised until the end of March, here’s what we know so far...

How will the bursaries work?

Rather than students applying to the government or HEFCE for a grant, the money will be provided to directly participating institutions – not all higher education institutions have signed up to the scheme, but there are well over 100 involved, ranging from private higher education colleges to renowned public universities, such as the University of Birmingham and the London School of Economics. In fact, since the announcement was made by HEFCE, some top institutions have been clamouring to advertise their involvement on Twitter:

The grants will also be match funded, meaning that for every student offered a grant, the university will receive £5,000 from HEFCE and will have to contribute a further £5,000 from its own resources. Although the amount awarded will always be equivalent to £10,000, the way it’s distributed may differ between institutions – for example, some may offer the student the full £10,000 cash up front, while others may issue successful students with a £5,000 maintenance grant, most likely from the HEFCE contributed money, and waive up to £5,000 of tuition fees to make up the full sum.

Every university signed up to the scheme will be given a certain number of grants each, which will vary between institutions. Theoretically, there will be no restrictions on which subjects students can read using the money, but universities will be free to distribute the grants between courses as they see fit in order to meet their criteria of helping ‘under-represented’ students into postgraduate education (meaning there may be 80 grants out of 110 available for prospective physics students, 30 available for those enrolling on engineering courses and none for history or language courses, for example). The final numbers of grants awarded to each participating uni or college might be subject to change until the figures are finalised at the end of March.

Are there any restrictions?

The bursaries will only be available on master’s level courses, so postgraduate courses which result in a lower-ranked qualification – such as a Postgraduate Certificate or Postgraduate Diploma – won’t have any grants available, and nor will higher level courses such as PhDs. The money will also only be made available on taught courses. Again, it’s up to the university to define what it considers a taught course, but students taking heavily research-based qualifications, such as the MRes, won’t be eligible under the scheme.

Interestingly, although the postgraduate loans set to be introduced in 2016 will only be available to the under-30s, no age restrictions on the bursaries have been mentioned so far, but only students who started undergraduate courses after tuition fees were raised to £9,000 in 2012-13 (and who are due to graduate before 2016) will be eligible to apply.  As the scheme is run by the Higher Education Funding Council for England, only graduates of English universities can apply at present.

Eligibility criteria – who is under-represented?

Unlike the £10,000 loans due to be introduced in 2016 – which will be non-means tested and available to all students under 30 – the bursaries are designed to help students considered to be from a background that is under-represented at their university or in their subject area. Somewhat controversially, there are no set eligibility criteria; it is up to each university or college to define who or what is under-represented, but some people who may be eligible to apply include:

- Students who come from a low performing socio-economic area or group (students from a deprived town or from certain minority groups, for example)

- Students who are under-represented in their academic fields – for instance women studying STEM subjects (science, technology, engineering and mathematics), which tend to be male dominated (this goes some way towards explaining why many courses already advertising grant availability tend to be in the sciences, rather than humanities)

What do students think?

To see how well news of the new grants is going down with current students, we caught up with Amira McCarthy, who’s studying Astrophysics at the University of Sussex. As a female, final year student of a STEM subject, Amira is one of many students who could be eligible for a grant.

“I’d consider applying for a grant if I turned out to be eligible”, Amira said, adding that while the postgraduate loans that will be made available from 2016 do make postgraduate study more appealing, she’d be wary of the repayments. “Obviously a bursary is preferable to getting into more debt.”

Although Amira thinks it’s undeniable the 2015 bursaries will see a greater number of students enrol on postgraduate courses who might not otherwise have been able to do so, for her and her friends there is a big downside: “The problem is, the announcement has just come too late. If we’d have known about this in September, as we started our final year, more of us might have made the decision to stay on for a master’s, but as it is, we’ve all already made plans by now, either to do a master’s we’ve already arranged to pay for (lots of students on courses like Astrophysics can choose to add an integrated master’s year into their course, paying an additional year’s tuition fees) or to go straight into work, with jobs lined up.”

When we asked Amira if she thought the bursaries will go far enough to encourage women to study STEM subjects at postgraduate level, she told us there’s a lot more that could be done, and that it needs to start earlier. “There need to be more female role models. All the ‘cool’ scientists like Brian Cox are male, most science teachers are male, and all the people who come to schools and universities to speak about studying science tend to be male. The reason women are under-represented in STEM subjects at university and at postgraduate level is because they’re not choosing to study them at A-level – subjects like physics and engineering just aren’t promoted to girls in the way they are to boys.  The reason women who study STEM subjects at undergraduate level don’t go on to do a master’s is usually money, so in that respect the bursaries are a great idea, and to a lesser extent the loans too, but the reason they’re under-represented in the first place is because girls aren’t being told in school that they can study subjects like that. And they should be, right from the beginning.”

One thing that Amira thinks could encourage more women into postgraduate study in traditionally male dominated fields, alongside the bursaries and the forthcoming loans, is greater participation in the Athena Swan awards. “Lots of unis (the total figure currently stands at 125), like Sussex for example, are already involved in the Athena Swan awards, where if they actively promote women in STEM subjects in higher education and help them advance their careers, they can apply to win an award recognising their efforts. I think more universities getting involved in schemes like that would really help encourage more women to stay on for further study.”

- How Will The New Postgraduate Loans Actually Work?

- Are the New Postgraduate Loans Really a Good Thing?