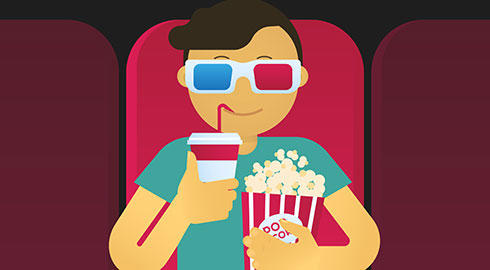 The great student population makes for excellent film fodder for directors across the world, but there are a few films that will make you want to stick around for longer than your allotted three (or four) years of a standard undergraduate degree.

Here’s our pick of films that will make you want to stay in university, possibly forever, until you have to face the real world one day, or return to learning once you’ve already escaped.

Matt Damon’s Will Hunting is earning a living in the real world, but puts actual graduate students to shame with his ability to solve difficult equations at the infamous Massachusetts Institute of Technology (MIT).

Perhaps it’s true that just being in the surroundings of such a great place of learning automatically make you cleverer, well it can’t hurt at least.

There must be something about the ease of making a maths student look smart, as A Beautiful Mind is another one that makes you want to whip the calculator out and figure out difficult equations on a chalk board.

Based on the true story of John Nash, who was a graduate student at Princeton University and later goes on to teach at MIT, Nash gets invited to the Pentagon to work on enemy encryptions.

The possibility of basically being a spy because of your postgraduate degree is pretty cool, no?

Oh and he also goes on to win a Nobel Prize, too, no biggie.

Both the Pitch Perfect films feature standard undergraduate students on the whole, but there is one student (Chloe) who by the second film has stuck around solely for the purpose of staying in the acapella group.

Although technically she’s not a postgraduate student, being one often gives you access to many of the same clubs, societies and social activities as your younger undergraduate friends. Who doesn’t want to delay entering the real world for another couple of years so they can sing cover versions without any instruments in sight?!

In this 90s cult classic, Keifer Sutherland, Julia Roberts and Kevin Bacon play medical students who attempt to find out what lies beyond death with a bunch of dodgy experiments.

Surely, anybody who sticks around in university long enough to study medicine is involved in some sort of dodgy, yet cool, experiments? And surely all your classmates are Kevin Bacon, Julia Roberts, Keifer Sutherland, or some kind of bizarre mixture of all of the above?

We’ve got a feeling that an actual medical school may be somewhat disappointing in comparison to this silly cheesefest, but that doesn’t stop us wanting to study it anyway.

This 1970s thriller features a History PhD student (and avid runner, hence the title…) played by Dustin Hoffman and centres around all manner of exciting plots, including secret government agents, Swiss girlfriends, trips to Paris and living in New York.

Oh and there’s a pretty disturbing scene in a dentist’s chair, too.

Anyway, all that aside, it makes you wonder if everybody studying for a PhD is going to uncover some massive historical conspiracy, and it’ll probably also make you contemplate if you too can fund postgraduate study in Manhattan. Perhaps one to consider after you’ve earned a fair chunk of cash in an actual job first though…

NEXT STEP: FIND A POSTGRADUATE COURSE