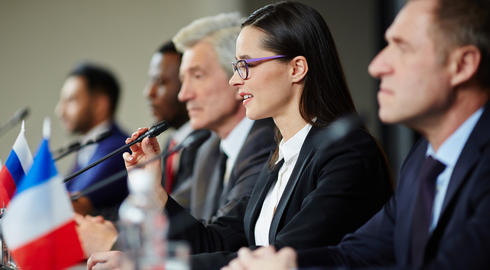 We spoke with Alexa Greenwald, who studied on the Executive MSc International Strategy & Diplomacy programme at LSE IDEAS about where her postgrad course took her…

Why did you decide to do Postgraduate study?

I had been working for a number of years, first for an advocacy and research non-profit in Vienna that assessed the radicalisation of European youth, and then in a role translating government policies into local programs to solve for major development challenges.

After 5 years, I felt that I had reached a kind of plateau in my own practical experience: I wanted to expand my knowledge through a combination of theory and other concrete, real-world examples and case studies so I could be more effective in my job.

What made you pick your course?

I work in International Development, where there can be a significant disconnect between the high- level policymakers deciding the development priorities and those “on-the-ground” designing and implementing programming.

The development of an entire country with so many stakeholders becomes very complicated very quickly. Development professionals are basically continually asked to understand, interpret, and put into effect foreign policy. And yet are often siloed from the intricacies of how foreign policy is made.

I personally felt I would be more effective if I better understood, on a practical level, what happens in the corridors of power. How decisions are made in real-time, where and how miscommunication and other problems emerge, what is the actual coordination processes with different countries, and how does this all trickle down to the ground-level.

I hoped to gain a clearer view of the tiers above my position as International Programme Manager, so I could better anticipate and circumvent the barriers to efficacy.

What was the best thing about your course?

Along with the impressive faculty and guest lecturers, which include diverse academics, former and current government officials, diplomats, business leaders, and policymakers, what I most appreciated about the course was the varying perspectives present in my cohort.

There were over 15 countries represented; a fair gender balance; early, mid and later career individuals; and the full spectrum of IR-related industries.

I learned from my peers just as much as I did from the professors, which in my opinion, is the mark of a successfully designed program.

What have you done since you graduated?

I moved into a new role as Regional Manager of Afghanistan and Pakistan at Sayara International, the company I’ve worked with for three years. They are an international development company with six global offices that cover over 10 different countries.

Sayara has held large US government development contracts as well as projects with UK DFID, EU, and UN agencies across sectors including strategic communications, governance, health research and community engagement.

How has your Master’s helped you in your new role?

From my Master’s programme I brought new insights and different modes of thinking to the projects I worked on including an Elimination of Violence Against Women (EVAW) project and a countering violent extremism through community cohesion project in Afghanistan.  I am now beginning a new role in Pakistan’s first-ever digital media company that is helping to develop and diversify the country’s information space.

Do you believe your Master's has helped your career in the way you hoped it did?

I do. I often apply case studies I learned in the course to my work. For example, Sir Malcolm Rifkind discussed the intricacies of decision-making during the Bosnian War, and specifically the unexpected problems that arose from the fact that the UN peacekeeping forces were made up in part by the same countries that were contributing combat forces.

This was an excellent lesson-learned in how failing to understand perceptions on the ground can impede the effort at-large. I have reflected on this particular example when implementing sensitive security programming and discussing who and what will perform different roles.

I now have an expanded pool of practical experience to draw from and a theoretical underpinning to inform my work. I look forward to applying this deepened knowledge of international relations, strategy, and decision-making to my new role.

** LSE IDEAS, which is the no.1 ranked university-affiliated think tank in Europe, and ranked no.2 in the world.