Student Stories: What it’s Like to Study Postgraduate Journalism 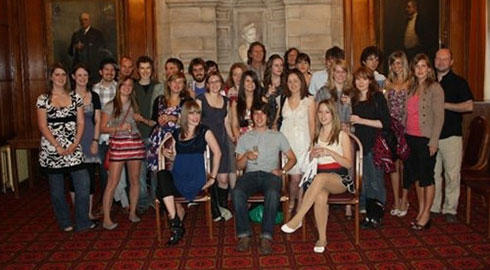 There are quite a few routes into writing for a living, but one of the most popular is studying for a postgraduate degree, such as a diploma, which will often you give you the skills and experience you need for one of the best careers there is (though I’m perhaps a little biased).

I studied for a postgraduate diploma in Magazine Journalism at Cardiff University, graduating back in 2009. Recently named as the best place to study journalism in the UK, I feel very lucky to have attended such a great school, and hold it responsible for where I’ve ended up.

I decided to study journalism because the subject fascinated me, and I chose Cardiff because I was aware of its excellent reputation as a journalism school before I even started my bachelor’s degree.

Studying for a postgraduate journalism degree can be a lot of fun, but make no mistake, it can be incredibly gruelling work too. I would say it’s no exaggeration to say that I worked the hardest I ever did in my life during the course. Most of the time it was actually harder than anything I’ve ever had to do in the “real world”, especially as I wasn’t being financially rewarded for it.

For the first few months of the course, you’ll be taking part in writing, subbing (proofreading and editing), page design and other exercises which give you the practical skills you’ll need to deal with a life in journalism. You’ll also be attending other classes such as Media Law, Shorthand and Public Admin. Personally I’ve never found much of a use for the latter of the three, but the other two have proven incredibly useful over the years (and you’ll use public admin if you go into local newspaper journalism, don’t worry).

Then, at some point you’ll find that you’re having to create a real, living, breathing magazine - along with any accompanying website or digital product. When I took the course, digital magazines were barely in their infancy and there was no such thing as Apple Newstand… how things change in just a few short years.

It’s that experience of creating something which is the tough part - regular 12-15 hour days where you didn’t see daylight or loved ones blended into weeks, and having to work closely with people who just a few months previously had been complete strangers can be incredibly challenging. But it’s also incredibly rewarding and gives you a proper and valuable insight into what it’s like to create something for other people to read and consume.

A great aspect of studying a postgraduate diploma in journalism is the real life work experience you’ll be expected to complete as part of the course. You’ll need to find somewhere willing to take you on for at least two weeks, but the fact that you’re studying for a postgraduate diploma (rather than just an undergraduate degree) will set you apart as someone a little more serious - and it will usually open doors for you.

What’s more, if you attend an esteemed school  then you’ll generally find a vast network of alumni that will generally warm towards you a little more because of your shared experiences of certain classes, teachers and experiences. Not to mention they should have a good idea of whether you’re going to be up to scratch because of your training. Once you’ve graduated from the course, you should find this alumni network continues to offer support, too, helping you long after you’ve submitted your final assignment.

There’s lots to be said for studying on a course like this, however, that’s not to say it’s without its drawbacks. The biggest being the cost - there’s no denying it can be an expensive route into an industry that, without wishing to sound too blunt, isn’t likely to make you a millionaire. However you can apply for a bursary or grant to help you financially, and you can also apply for loans like the career development loan which many banks offer.

Is It For You?

A postgraduate diploma in journalism isn’t for everybody. In this day and age, your contacts and experience can mean more, and in a time when anybody can set up a blog and start writing, there are other, less conventional routes into a career like this and that’s important to remember. However, for anybody lacking the confidence, contacts or indeed, the invaluable writing skills which you need to be a journalist, it can also transform your prospects.

Did It Help Me?

After completing my diploma I was fortunate enough to find employment straight away. Although not everyone is as lucky as that, I genuinely believe that it was through my postgraduate degree that doors were opened, and that I had the skills to hit the ground running with the job right away. I worked full time in a large publishing house for five years before eventually making the decision to try my hand at a freelance journalism career.

Although I have picked up many skills from my time working in the industry, it’s also true that I still use the skills learned at Cardiff today in my current position, while those that I met along the way who are part of the Cardiff network have also proved invaluable for contacts, too.