A PhD in the Humanities: Why? 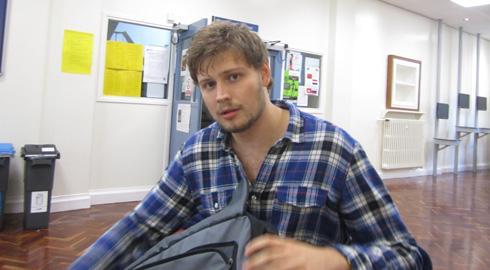 Our PhD blogger, David Spittle, is currently studying for a PhD in English Literature (focussing on the poet John Ashbery) at Newcastle University. He lets us in on his decision to commit to another four years in higher education...

At what point does applying for funding, or scrabbling around to support a self-funded existence in order to facilitate a four-year long essay, appear to be an inviting scenario? Like watching Pasolini’s Salo: 120 Days of Sodom, becoming a militant vegan or traversing the English Channel (armed only with a pair of speedos and a vague sense of optimism), undertaking a PhD is not to be recommended lightly. By which I mean, via warbling digression, that a touch of preparatory context is always useful. Some universities enable the kind of integrated contact between MA students and PhD students that, while studying on your MA (or even, in some cases, your undergrad) enables you to have a sense of what a PhD entails, and the kind of obscure specimens who end up pursuing this end-of-the-line of qualifications.

However, it is more likely that the notion of a PhD in the humanities hovers in a kind of abstract realm between what you have heard, vague memories of what you may have – at one point – been told, a recollection of a first year tutor (seeming just as awkward as you were perhaps feeling) and a fanciful imagining of yourself as a visionary hermit, buried to the waste in a sea of emptied coffee mugs while you mutter with Nietzschien intensity to the collage of sticky notes that adorns your wall…a kind of academic equivalent to the psychopath’s collage, devised between episodes of Come Dine with Me and bouts of nervous exhaustion. Or, you might in fact be a far more functioning and capable human being than I was at the point of deciding on a PhD. In which case: you can probably just ignore the neurotic asides and deprecating, I’ll get to the point eventually. Although, the point… to return to that – why?

In the wake of ‘Uni Culture’

I had always been fairly certain that I would stay with academia for as long as possible – no, that’s a lie, I had always been fairly certain that I wanted to write and read for as long as possible. The love and enthusiasm I had for literature, whether it was analysis, absorption, creation, confusion, or celebration, was something I was sure of from an early age and that through my undergrad and MA was, thankfully, confirmed. It does not take a delicate or insightful mind to ascertain that an undergraduate degree is a distracting time: ‘uni culture’ (pronounced ‘UNEEEEE’) as it has evolved has more and more convincingly eclipsed the ‘disciplines’ it purports to support or teach. This is not a lame observation of superior distancing; I would not begrudge the unhealthy tide of alcohol that was consumed or the unexpected and memorable range of experiences available… but what I would say is that those years are a rushing and distracting plunge, more often characterised through the gloriously social and emotional than the intellectual. Again, this is, as always, a subjective account! By third year I found myself realising just how much work I had to put into an essay to feel the intellectual reward (‘intellectual reward’ being too pretentious a term, but basically equating to a sense of achievement). Turns out spending a bit more time in the library does help, etc. By the time I was on the MA, I found seminars had become far more earnestly involving and that the work – embraced with more attention and time – became more immersive and invigorating. Being only a year, you’re only a couple of essays in and the MA is nearly over and the possibility of what lies beyond rears its spectral form.

Do you need a break?

So, to briefly and autobiographically summarise, I am irreversibly institutionalized in this whole ‘education’ system: from school, to undergrad, to MA, to PhD. I feel it is probably important to supply this encapsulation of my conveyor belt trajectory, as it can hopefully lend a sense of perspective to my resulting opinions. I feel that a year out, here or there, or the experience of a full-time job in another line of work would inevitably change you and how you (oh, mysterious reader) would approach or think about the commitments of a PhD. On the positives of not taking years out, there is certainly a sense of momentum and a logically increasing familiarity with certain academic demands. On the negatives, if you are not careful it is easy to become detached from certain (*cringe*) ‘transferrable’ life skills in the insular routines of study – also if, like me, you ‘go through the system’ (without break) there will definitely arrive moments in which you naturally crave a more immediately functional way of spending time. There are plenty of ways to accommodate for this desire on the PhD with a bit of foresight, multi-tasking and self discipline, but it is definitely a worthwhile topic to consider: have you got the excitable passion and dedication to your chosen subject to sustain another four years (completion is possible in three, but, more often than not, a rare exception) of concentration, research and writing? A moment to casually assess the ol’ cognitive stamina is not a bad idea!

The incentive to continue…

Now that I have gestured towards the potentially exhausting nature of the beast, I can say a little bit about what it was that appealed to me about doing a PhD – so what is it that makes this venture so attractive? Having burrowed further and further from what I initially ‘knew’ about literature (specifically poetry) I came across types of writing that excited me in the same way that – as a quintessentially introspective teenager – music had previously done. Discovering poets that wrote in ways which could not only coax me into re-imagining what it was that poetry is and can do, but that could also engage me with genuinely thrilling questions about poems that are not about but that tickle attention into playful communion with themselves… attending to attention, thinking about thinking, crawling inside the odd, cumulous levers of the mind and no longer trying to be about, but enact and recreate whatever it is our minds are capable of making us experience on a day to day basis… poetry as a prompt for tuning into types of consciousness… all of which I am conveying here in laughably vague abandon… and which, justifiably, might be inducing you to scan quicker through these lines to reach some kind of concluding comment… so, brace: the idea that I could, just maybe, spend the next couple of years learning about John Ashbery (the poet who exploded my conception of poetry when, in a seminar on ‘Postmodern American Poetry’, I encountered his poem, ‘The Skaters’ ), delving into surrealism, legitimately exploring bizarre avenues of film, spending time with art, and generally trying to understand whatever it was that felt so intoxicatingly outside of my previous parameters of understanding… the chance to do all of this, with the time, space and intensity to hopefully advance previous ways of thinking about such things… well, in that context, it becomes more than a little tempting.

You can read more from Dave on his blog, The Midnight Mollusc. He’ll also be writing more about PhD life for us in the near future, so stay tuned…